Patient P (for positivity), as I will call him, was like other people who go about their daily lives, who utilize the Indian Health Service for their physical needs, but Patient P knew when something was wrong. He was feeling bloated and he knew that he needed to go to IHS for a checkup. This led to a course of treatment that led to medication therapy and a follow up for unexplained loss of blood and abdominal pain. Through lab tests, as well as continuity of care with a local oncologist, it was determined that Patient P had a form of lymphoma.

Patient P was determined, as was the Green care team at IHS that this was something that we could get answers for, and so the continuity of care cycle ran strong. This is where IHS Fort Washakie, located on the Wind River Indian Reservation, stepped in to fill a gap of understanding, of facilitation and of patient focused culturally competent care.

We were able to utilize home health care during this process where there were weekly lab tests and continual calls regarding the best options available. Patient P was eventually directed to the University of Colorado in Denver where he started treatment for Burkitt’s lymphoma, a cancer of the lymphatic system.

Due to the rural nature of some IHS facilities, traveling icy roads back and forth between Denver and IHS Fort Washakie was a complicated situation. Patient P had a support system, his family was diligent, he was positive, and his bright spirit and smile showed bravery and it enhanced his healing process.

The next few months saw positive test results, Patient P was able to gain back weight, his vital signs became progressively better and his strength began to return. Patient P’s care continued at IHS, wound care became a daily occurrence, wound surveillance led to understanding when intervention was needed, surgeons were consulted, and the positive track of healing continued.

Patient P has expressed his thankfulness to the individuals at his IHS Medical Home, but truly the thanks goes to him, he has survived the hardest part of the battle, and his care team will be here to help with continued medical care on what will likely be a lively and long life.

Empowerment of individuals, helping them understand the process of care, facilitating what is necessary so patients can take an educated active role in their healing; that is a positive role that IHS Fort Washakie will continue to assist with and achieve for the people we serve.

Mr. Bryce Redgrave, a member of the Northern Cheyenne Tribe, is the Executive Officer of the Billings Area of the Indian Health Service. In this position, Mr. Redgrave provides leadership to the Billings Area and oversees the delivery of health care to more than 70,000 American Indians and Alaska Natives on seven reservations in Montana and one in Wyoming. 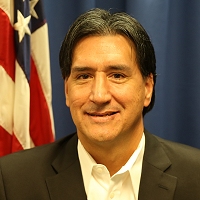