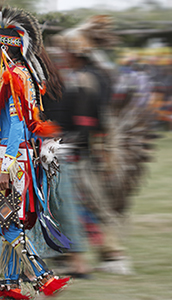 Though Two-Spirit may now be included in the umbrella of LGBTQ, The term "Two-Spirit" does not simply mean someone who is a Native American/Alaska Native and gay.

Traditionally, Native American two-spirit people were male, female, and sometimes intersexed individuals who combined activities of both men and women with traits unique to their status as two-spirit people. In most tribes, they were considered neither men nor women; they occupied a distinct, alternative gender status. In tribes where two-spirit males and females were referred to with the same term, this status amounted to a third gender. In other cases, two-spirit females were referred to with a distinct term and, therefore, constituted a fourth gender. Although there were important variations in two-spirit roles across North America, they shared some common traits:

Most Indigenous communities have specific terms in their own languages for the gender-variant members of their communities and the social and spiritual roles these individuals fulfill; with over 500 surviving Native American cultures, attitudes about sex and gender can be very diverse. Even with the modern adoption of pan-Indian terms like Two-Spirit, not all cultures will perceive two-spirit people the same way, or welcome a pan-Indian term to replace the terms already in use by their cultures.

The disruptions caused by conquest and disease, together with the efforts of missionaries, government agents, boarding schools, and white settlers resulted in the loss of many traditions in Native communities. Two-spirit roles, in particular, were singled out for condemnation, interference, and many times violence. As a result, two-spirit traditions and practices went underground or disappeared in many tribes.

Today, lesbian, gay, bisexual, and transgender native people throughout North America are reviving the two-spirit role and its traditions. National gatherings of two-spirit people have been held since the early 1990s, and regional gatherings are held in many parts of the country.

Native Out Exit Disclaimer: You Are Leaving www.ihs.gov  Webinar

Two-Spirit Identity: Then and Now Exit Disclaimer: You Are Leaving www.ihs.gov  Presentation

PBS's Independent Lens presented the film "Two-Spirits" Exit Disclaimer: You Are Leaving www.ihs.gov  offering information about the history of Two-Spirit people and a mother's loss of a son to a modern hate-crime.

"Two-Spirit: The Trials and Tribulations of Gender Identity in the 21st Century Exit Disclaimer: You Are Leaving www.ihs.gov ," Indian Country Today, 2015