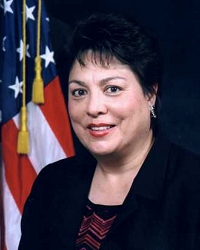 Ms. Kerrigan’s career with the IHS began in 1979, when she worked for the California Area Office of Program Operations. She also served in the IHS Phoenix and Nashville Areas, and from 1989 to 1996, she served as director of the Division of Management Policy, Office of Administration and Management, at IHS Headquarters in Rockville, Maryland.

In September 1996, Ms. Kerrigan assumed responsibilities as the director of the California Area. During her leadership, Ms. Kerrigan managed a unique health care program provided entirely through contracts in accordance with the Indian Self-Determination and Education Assistance Act. In the California Area, her leadership helped to provide health care to 103 tribal communities through 26 rural health care operating units, seven urban health programs, and 14 alcohol treatment programs.

Ms. Kerrigan was a strong advocate for the Government Performance and Results Act and led the agency’s support team for national GPRA performance reporting and inclusion in the annual IHS budget request. She partnered with and supported the California Area tribal health programs in co-sponsoring annual conferences and training for tribal health care providers, and established numerous Web portals to bring subject matter experts to exchange best practice information to the many tribal programs. She worked tirelessly with the Area tribes and IHS staff on funding for the much anticipated Southern and Northern California Youth Regional Treatment Centers, the first federal health care facilities to be constructed in the state. She looked forward to the completion and opening of these long-awaited facilities.

Ms. Kerrigan held a Bachelor of Arts degree in Human Biology from Stanford University and a Master of Public Health degree from the University of California, Berkeley. She was actively involved in the American Public Health Association (APHA) and was the first American Indian to serve on the executive board in its 120-year history. She also founded APHA’s American Indian and Alaska Native Caucus.

In 1993, she received the Public Health Service Special Recognition Award for outstanding contributions to the management control systems of the IHS. In 1997, she was recognized by Vice President Al Gore’s National Performance Review Committee for her contributions to the U.S. Department of Health and Human Services Internal Regulations workgroup. She was inducted into the Stanford University’s Alumni Hall of Fame for her contributions in public service to Indian people. In FY 2002, Ms. Kerrigan was selected as a recipient of the Presidential Rank Award.

The IHS, an agency in the U.S. Department of Health and Human Services, provides a comprehensive health service delivery system for approximately 2.2 million American Indians and Alaska Natives who are members of federally recognized tribes.