Indian Health Service
The Federal Health Program for American Indians and Alaska Natives
The Indian Health Service is working closely with our tribal partners to coordinate a comprehensive public health response to both COVID-19 and mpox.
Navajo Area 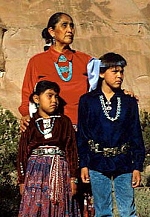 Anthropologists believe the Navajos probably arrived in the Southwest between 800 and 1,000 years ago, crossing the Bering Strait land bridge and traveling south. The Navajo people call themselves Dine', literally meaning "The People." The Dine' speak about their arrival on the earth as a part of their story on the creation.

The Navajo are believed to have learned the rudiments of agriculture after arriving in the Four Corners area. They became acquainted with domesticated livestock after contact with the Spanish, taking on shepherding and horsemanship.

After the United States defeated Mexico in 1846 and gained control of the vast expanse of territory known today as the Southwest and California, the Navajos encountered a more substantial enemy. Colonel Kit Carson instituted a scorched earth policy, burning Navajo fields and homes, and stealing or killing their livestock. After starving the Navajos into submission, Carson rounded up every Navajo he could find - 8,000 men, women and children - and in the spring of 1864 forced his prisoners to march some 300 miles to Fort Sumner, New Mexico. Navajos call this "The Long Walk." Many died along the way, and died during the four long years of imprisonment. In 1868 after signing a treaty with the U.S., remaining Navajos were allowed to return to designated lands currently occupied in the Four Corners area of the U.S. 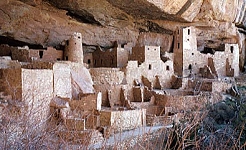 The Navajo Nation is the largest Indian reservation in the United States, comprising about 16 million acres, or about 25,000 square miles, approximately the size of the state of West Virginia.

Some of the most photographed scenery in the United States is on the reservation, notably Monument Valley near Kayenta, Arizona, and Canyon de Chelly near Chinle, Arizona. The geological history of the area is so apparent and stunning that it begs close investigation. Volcanic plugs and cinder cones, uplifted domes of rock that form mountains, and twisted meandering streams that have carved canyons over many hundreds of years make the high desert plateau inhabited by the Navajo people among the most interesting locations to live and work in the United States.

Average precipitation on the Reservation ranges from five inches in the lower elevations to 25 inches in the heights. Some of this is in the form of snow. The entire area is subject to winter snow and temperatures below freezing; summer temperatures may top 100 degrees with extreme aridity. During the late summer, seasonal torrential rains render many unpaved roads impassible and flash floods common to the Southwest US are not uncommon. 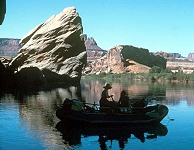 Generally speaking, Navajos do not live in villages. Their traditions did not dictate this necessity, as is common with other Native American societies. They have always banded together in small groups, often near a source of water. Their wide dispersion across the reservation is due in part to the limited amount of grazing land, and the limited availability of water.

The traditional Navajo dwelling, the hogan was a conical or circular structure constructed of logs or stone. The more modern version is usually six-sided with a smoke hole in the center of the roof constructed of wood or cement. The doorway typically faces the East to receive the blessing of the day's first rays of sun.

Traditionally, the Navajos are a matriarchal society, with descent and inheritance determined through one's mother. Navajo women have traditionally owned the bulk of resources and property, such as livestock. In cases of marital separation, women retained the property and children. In cases of maternal death children were sent to live with their mother's family. Traditional Navajo have a strong sense of family allegiance and obligation. Today, Navajos are faced with large unemployment rates; and "acculturation" to a more nuclear family structure similar to Anglos in the U.S. is increasingly present. As a culture in transition, the Navajo people and their traditional lifestyle is under the substantial stress brought about by rapid change in their society.