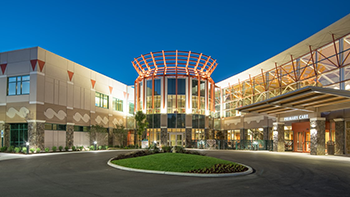 Designed for and by the Tribal Community

When the Eastern Band of Cherokee Indians opened the new Cherokee Indian Hospital in November 2015, the state-of-the-art, 155,000-square-foot facility received accolades not only from the local Cherokee, NC, community, but also national recognition for its unique architectural and patient-centered interior design. Best of all, the new facility increased dental services and patient traffic to the dental clinic, according to CAPT Joyce Biberica, Dental Director at Cherokee Indian Hospital and Pediatric Dentist.

The 20-bed hospital began serving patients last November. It is nestled in the foothills of the Great Smoky Mountains in the western tip of the state. The facility, which cost $82 million, was designed with input from the community and paid for entirely with Tribal funds.

“We’re delivering more services now than we were before. We’re able to deliver a higher level of service to our population,” Biberica says. “Before we were trying to take care of the basic needs of our patients. Now we’re doing crowns, partials and dentures; moving into the new facility has really allowed us to do this because we have the space to do it.”

The dental clinic now offers a 3-D Panorex machine, which is helpful for oral surgery and endodontics, Biberica says. There is digital radiography throughout the facility. The clinic also purchased a CEREC machine, also known as a Ceramic Reconstruction machine, a computer-aided design/camera that allows dentists to photograph and form dental reconstructions within their office. Today, the Cherokee dentists can make crowns in one visit so patients don’t need to make a return trip.

“Sometimes patients will be traveling from a far distance,” Biberica says. “We can have the tooth prepared for the crown and have the permanent crown put on that day.”

“It gives the patient more confidentiality and provides a space without distractions,” Biberica says. In addition, the new facility includes an integrated care room, allowing all providers and support staff to be in the same office to discuss treatment options.

“In the past, we were separated into three offices and this really created silos among the providers,” Biberica said. “Our patients benefit from having providers share ideas on different treatment options and other situations regarding patient management.”

The dental facility has a separate pediatric section, with a door between the adult suite and the pediatric suite. There also are two separate waiting rooms for adults and families that overlook the hospital’s gallery with beautiful views of the surrounding mountains. The pediatric waiting room has kid-friendly furniture, toys and TV programming.

Of the dental clinic’s 21 operatories, 18 are outward facing with windows, Biberica says, allowing patients to take in the scenery from the dental chair. Nitrous oxide is available at each dental station for younger patients who may be apprehensive.

The dental clinic’s location in the hospital gives it increased visibility and that has helped increase the number of patient visits. “More patients are seeing us,” Biberica says. “We have more walk-up interactions where people will come by and make an appointment.”

Biberica says the dental clinic’s location has corresponded with about a 20 percent increase in patient visits: the clinic had 2,311 visits from May 1 to July 29 in 2015 and 2,964 patient visits from the same period in 2016. And, she says, not only are more patients making appointments, they’re keeping them as well.

The hospital, which serves more than 11,000 Eastern Band of Cherokee Indians in western North Carolina, incorporates several Tribal elements into its design. The hospital’s main pathway incorporates a “River Walk” design, which leads patients, visitors and staff past scenes of Cherokee legends. A man-made waterfall welcomes patients and their families at the front of the building and local artwork hangs throughout the facility. There is ample natural light in the facility with views of the surrounding mountains.

When the facility held its grand opening in October 2015, North Carolina Health News reported that when the Cherokee Indian Hospital Authority (the Tribes’ governing board) met with the design team, one requirement was first and foremost: to ensure that the building accentuated the beauty of the environment in which the Tribe lived and remained true to the Tribe’s strong sense of place.

The new building was designed to complement its landscape and the design promotes healing, says Biberica. “It fits in beautifully and seamlessly in its surroundings. When you think of a hospital, it connotes so many negative thoughts,” she adds. “This is a place where people want to come and heal.”